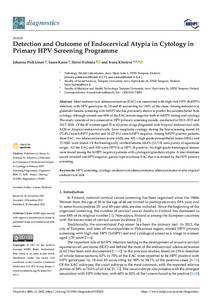 Most endocervical adenocarcinomas (EAC) are associated with high-risk HPV (hrHPV) infection, with HPV genotypes 16, 18 and 45 accounting for >90% of the cases. Among endocervical glandular lesions, screening with hrHPV test has previously shown to predict the outcome better than cytology, although around one-fifth of the EAC remain negative both in hrHPV testing and cytology. The study consists of two consecutive HPV-primary screening rounds, conducted in 2012–2015 and 2017–2020. Of the 87 women aged 35 to 60 years of age diagnosed with Atypical endocervical cells, NOS or Atypical endocervical cells, favor neoplastic cytology during the first screening round, 63 (72.4%) were hrHPV positive and 24 (27.6%) were hrHPV negative. Among hrHPV positive patients, three EAC, two adenocarcinomas in situ (AIS), one AIS + high-grade intraepithelial lesion (HSIL) and 13 HSIL were found. Of the histologically verified lesions, 68.4% (13/19) were purely of squamous origin. All the EAC and AIS were HPV16 or HPV 18 positive. No high-grade histological lesions were found among the hrHPV negative patients with cytological glandular atypia. A later database search revealed one HPV-negative, gastric-type mucinous EAC that was missed by the HPV primary screening.