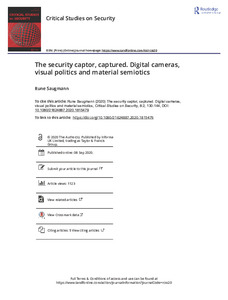 Digital cameras are everywhere and play important roles in security and political scenes, yet they remain overlooked in security and IR research where debates on technology and visuality remain separated, often giving the mistaken impression that the digital images that populate scholarship are primarily visual. In this paper, I understand the digital camera as an inscription device that produces digital images, for which the digital qualities are as important as the visual. Through producing standardised digital ‘factlets’, digital cameras become engines of ontological change that reconfigure political scenes, incorporating new actors and logics, and reconfiguring the ones already present. Digital cameras acquire security agency through our remarkable trust in digital cameras’ ability to capture reality as it is and store it in standardised files. The epistemic authority is not absolute, I show, but functions as a competence that can be exchanged, shared, and reconfigured. Digital cameras are promiscuous, forming hybrids with, e.g. images, digital media platforms, image appropriators, and camera operators. This relationality makes it hard to pin down exactly where the agency of digital cameras begins and ends. Viewed as an inscription device, the central faculty of the networked digital camera is that it inscribes the ‘reality’ of a political scene into fragmented but standardised video-bites and snapshots, little security ‘factlets’ preconfigured for effectively populating digital networks and databases.