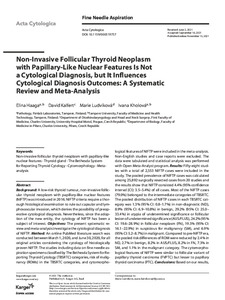 Background: A low-risk thyroid tumour, non-invasive follicular thyroid neoplasm with papillary-like nuclear features (NIFTP) was introduced in 2016. NIFTP criteria require a thorough histological examination to rule out capsular and lymphovascular invasion, which denies the possibility of preoperative cytological diagnosis. Nevertheless, since the adoption of the new entity, the cytology of NIFTP has been a subject of interest. Objectives: The present systematic review and meta-analysis investigate the cytological diagnosis of NIFTP. Method: An online PubMed literature search was conducted between March 1, 2020, and June 30, 2020, for all original articles considering the cytology of histologically proven NIFTP. The studies including data on fine needle aspiration specimens classified by The Bethesda System for Reporting Thyroid Cytology (TBSRTC) categories, risk of malignancy (ROMs) in the TBSRTC categories, and cytomorphological features of NIFTP were included in the meta-analysis. Non-English studies and case reports were excluded. The data were tabulated and statistical analysis was performed with Open Meta-Analyst program. Results: Fifty-eight studies with a total of 2,553 NIFTP cases were included in the study. The pooled prevalence of NIFTP cases was calculated among 25,892 surgically resected cases from 20 studies and the results show that NIFTP consisted 4.4% (95% confidence interval [CI]: 3.5-5.4%) of all cases. Most of the NIFTP cases (79.0%) belonged to the intermediate categories of TBSRTC. The pooled distribution of NIFTP cases in each TBSRTC category was 1.3% (95% CI: 0.8-1.7%) in non-diagnostic (ND), 8.9% (95% CI: 6.9-10.8%) in benign, 29.2% (95% CI: 25.0-33.4%) in atypia of undetermined significance or follicular lesion of undetermined significance (AUS/FLUS), 24.2% (95% CI: 19.6-28.9%) in follicular neoplasm (FN), 19.5% (95% CI: 16.1-22.9%) in suspicious for malignancy (SM), and 6.9% (95% CI: 5.2-8.7%) in malignant. Compared to pre-NIFTP era, the pooled risk differences of ROM were reduced by 2.4% in ND, 2.7% in benign, 8.2% in AUS/FLUS, 8.2% in FN, 7.3% in SM, and 1.1% in the malignant category. The cytomorphological features of NIFTP were similar to follicular variant of papillary thyroid carcinoma (FVPTC) but lesser to papillary thyroid carcinoma (PTC). Conclusions: Based on our results, NIFTP remains a histological diagnosis. Although cytomorphological features cannot be used in differentiating NIFTP from FVPTC, they may guide in separating NIFTP from PTC. Features such as papillae, microfollicles, giant cells, psammoma bodies, and the amount of papillary-like nuclear features should be taken into account when suspicious of NIFTP. NIFTP should not have papillae or psammoma bodies, and giant cells were rarely observed.