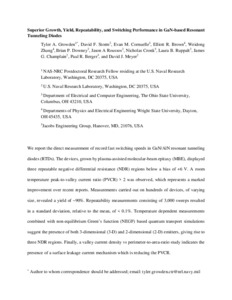 We report the direct measurement of record fast switching speeds in GaN/AlN resonant tunneling diodes (RTDs). The devices, grown by plasma-assisted molecular-beam epitaxy, displayed three repeatable negative differential resistance (NDR) regions below a bias of +6 V. A room temperature peak-to-valley current ratio (PVCR) > 2 was observed, which represents a marked improvement over recent reports. Measurements carried out on hundreds of devices, of varying sizes, revealed a yield of ∼90%. Repeatability measurements consisting of 3000 sweeps resulted in a standard deviation, relative to the mean, of < 0.1%. Temperature dependent measurements combined with non-equilibrium Green's function based quantum transport simulations suggest the presence of both three-dimensional (3D) and two-dimensional (2D) emitters, giving rise to three NDR regions. Finally, a valley current density vs perimeter-to-area-ratio study indicates the presence of a surface leakage current mechanism, which reduces the PVCR.