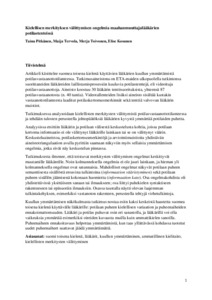 This article considers the listening comprehension skills in clinical skills tests taken by physicians who use Finnish as a second language. The focus is on communicating linguistic meanings. The aim is to present conclusions about the physicians’ ability to understand patients’ speech during their consultations. The research data consists of clinical skills tests for the licensing process of physicians who completed their degrees outside the EEA, i.e. video-recorded patient consultations. The data consists of 30 test results, a total of 87 patient consultations (approx. 40 hours). In addition to video recordings, the data includes the patient records of each consultation and reports by the physician supervising the test. The analysis examined situations in doctor-patient consultations where the information provided by the patient was either not communicated to the doctor at all or was miscommunicated. Data triangulation linking the video material, patient records and test evaluation records was used to reveal comprehension problems that remain hidden under the surface of the consultation. The study showed that problems in communicating linguistic meanings were manifested both as associations diverging from the semantic content of the patient’s speech (distortion of information) and as disregard for the patient’s speech (loss of information). Some problems may be associated with a single word or phrase, some with a syntactic structure or the indirect expressions of colloquial language. Some appeared to consist of misinterpretations based on a broader interpretation framework, such as the structure of the consultation. From the perspective of listening comprehension, the study highlighted two key challenges: the linguistic variation of the patient’s speech and the unpredictability of the topics of discussion. Physicians and patients use a different vocabulary, and a physician may have difficulty understanding matters such as symptoms when described in non-professional terms. Comprehension is facilitated by the predictability of discussion topics, whereas new topics arising at an unexpected point can lead to misunderstandings.