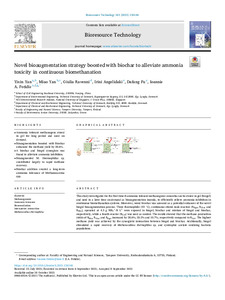 This study investigated for the first time if ammonia tolerant methanogenic consortia can be stored in gel (biogel) and used in a later time on-demand as bioaugmentation inocula, to efficiently relieve ammonia inhibition in continuous biomethanation systems. Moreover, wood biochar was assessed as a potential enhancer of the novel biogel bioaugmentation process. Three thermophilic (55 °C), continuous stirred-tank reactors (RBgel, RChar and RMix), operated at 4.5 g NH4+-N L-1 were exposed to biogel, biochar and mixture of biogel and biochar, respectively, while a fourth reactor (RCtrl) was used as control. The results showed that the methane production yields of RMix, RChar and RBgel increased by 28.6%, 20.2% and 10.7%, respectively compared to RCtrl. The highest methane yield was achieved by the synergistic interaction between biogel and biochar. Additionally, biogel stimulated a rapid recovery of Methanoculleus thermophilus sp. and syntrophic acetate oxidising bacteria populations.