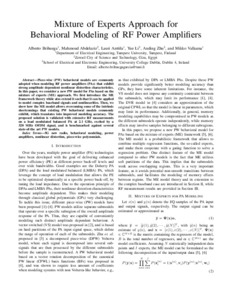 Piece-wise (PW) behavioral models are commonly adopted when modeling RF power amplifiers (PAs) that exhibit strong amplitude dependent nonlinear distortion characteristics. In this paper, we consider a new PW model for PAs based on the mixture of experts (ME) approach. We first introduce the ME framework theory while also extend it such that it can be applied to model complex baseband signals and nonlinearities. Then, we show how the ME model allows overcoming some of the intrinsic shortcomings that existing PW behavioral models commonly exhibit, which translates into improved modeling accuracy. The proposed solution is validated with extensive RF measurements on a load modulated balanced PA at 2.1 GHz, excited by a 320 MHz OFDM signal, and is benchmarked against several state-of-the art PW models.