Three multimodal action packages in responses to proposals during joint decision making : The embodied delivery of positive assessments including the Finnish particle ihan ‘quite’ 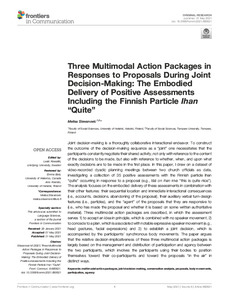 Joint decision-making is a thoroughly collaborative interactional endeavor. To construct the outcome of the decision-making sequence as a “joint” one necessitates that the participants constantly negotiate their shared activity, not only with reference to the content of the decisions to be made, but also with reference to whether, when, and upon what exactly decisions are to be made in the first place. In this paper, I draw on a dataset of video-recorded dyadic planning meetings between two church officials as data, investigating a collection of 35 positive assessments with the Finnish particle ihan “quite” occurring in response to a proposal (e.g., tää on ihan kiva “this is quite nice”). The analysis focuses on the embodied delivery of these assessments in combination with their other features: their sequential location and immediate interactional consequences (i.e., accounts, decisions, abandoning of the proposal), their auxiliary verbal turn-design features (i.e., particles), and the “agent” of the proposals that they are responsive to (i.e., who has made the proposal and whether it is based on some written authoritative material). Three multimodal action packages are described, in which the assessment serves 1) to accept an idea in principle, which is combined with no speaker movement, 2) to concede to a plan, which is associated with notable expressive speaker movement (e.g., head gestures, facial expressions) and 3) to establish a joint decision, which is accompanied by the participants’ synchronous body movements. The paper argues that the relative decision-implicativeness of these three multimodal action packages is largely based on the management and distribution of participation and agency between the two participants, which involves the participants using their bodies to position themselves toward their co-participants and toward the proposals “in the air” in distinct ways.