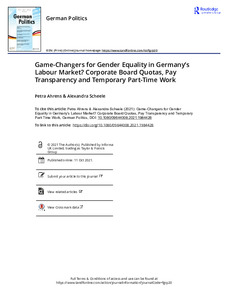 With a women’s employment rate of 76.6 per cent, Germany now ranks among the top EU countries regarding equal labour market participation. However, substantial differences in the employment patterns of women and men persist in the form of ‘typical’ women’s and men’s jobs, women’s underrepresentation in higher management, a high women’s part-time rate and a considerable gender pay gap. Since 2005, four CDU-led governments have adopted various labour laws, with the most recent of these potentially transforming gendered inequalities. The 2016 corporate board quota law addressed vertical segregation, the 2017 pay transparency act is seen as a means of tackling the enormous gender pay gap and the legal entitlement to temporary part-time work, which came into force in 2019, may tackle the so-called ‘part-time trap’ many women fall victim to. The article examines the implementation impact of the latest labour market reforms and discusses the ways in which they are potential game-changers in transforming the German gendered labour market.