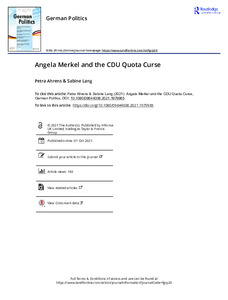 During the 2019 centennial celebration of women’s suffrage in Germany, Chancellor Angela Merkel conceded that gender quotas are important and that the ultimate goal must be parity. Merkel’s legacy in terms of advancing women within her own party, however, is mixed. Surrounding herself with a tight circle of women professionals and arguably modelling success for fellow women party members, she nonetheless remained noncommittal on parity. Her support for the ‘quorum’, a 33 per cent inner-party ‘quota light’ adopted in 1996, appeared muted and inconsequential. Throughout Merkel’s chancellorship, the CDU failed to adhere to this quota in party offices and among parliamentarians. Analysing gender-disaggregated party and electoral data with insights gleaned from semi-structured interviews with party members, this article sheds light on CDU quota implementation challenges. We assess inner-party politics and policies within the context of the CDU’s struggle to attract female voters, to respond to an increasingly progressive Women’s Union, and to accommodate its Bavarian sister party CSU. We find that despite a reframing of its gender equality agenda and strong inner-party mobilization, the CDU majority still resists quotas. The mismatch between party statutes and electoral system, moreover, obstructs quota implementation, making gender parity in the CDU an elusive goal.