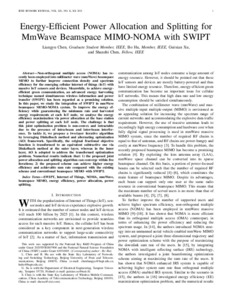 Non-orthogonal multiple access (NOMA) has recently been employed into millimeter wave (mmWave) beamspace MIMO to further improve connection density and spectrum efficiency for the emerging cellular internet of things (IoT) with massive IoT sensors and devices. Meanwhile, to achieve energy-efficient green communication, an advanced energy harvesting technique named simultaneous wireless information and power transfer (SWIPT) has been regarded as a promising solution. In this paper, we study the integration of SWIPT in mmWave beamspace MIMO-NOMA system. To improve the energy efficiency while guaranteeing the minimum rate and harvested energy requirements at each IoT node, we analyse the energy efficiency maximization via power allocation at the base station and power splitting at each IoT node. The challenge is that this joint optimization problem is non-convex and intractable due to the presence of intra-beam and inter-beam interference. To tackle it, we propose a two-layer iterative algorithm by leveraging Dinkelbach method and alternating optimization (AO) framework. Specifically, the original fractional objective function is transformed to an equivalent subtractive one via Dinkelbach method at the outer layer, whereas in the inner layer, AO is adopted to address the transformed optimization problem. Numerical results indicate that: 1) the proposed joint power allocation and splitting algorithm can converge within five iterations; 2) the proposed scheme can achieve higher energy efficiency and achievable sum rate compared with the existing scheme and conventional beamspace MIMO with SWIPT.