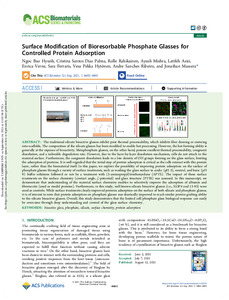 The traditional silicate bioactive glasses exhibit poor thermal processability, which inhibits fiber drawing or sintering into scaffolds. The composition of the silicate glasses has been modified to enable hot processing. However, the hot forming ability is generally at the expense of bioactivity. Metaphosphate glasses, on the other hand, possess excellent thermal processability, congruent dissolution, and a tailorable degradation rate. However, due to the layer-by-layer dissolution mechanism, cells do not attach to the material surface. Furthermore, the congruent dissolution leads to a low density of OH groups forming on the glass surface, limiting the adsorption of proteins. It is well regarded that the initial step of protein adsorption is critical as the cells interact with this protein layer, rather than the biomaterial itself. In this paper, we explore the possibility of improving protein adsorption on the surface of phosphate glasses through a variety of surface treatments, such as washing the glass surface in acidic (pH 5), neutral, and basic (pH 9) buffer solutions followed or not by a treatment with (3-aminopropyl)triethoxysilane (APTS). The impact of these surface treatments on the surface chemistry (contact angle, ζ-potential) and glass structure (FTIR) was assessed. In this manuscript, we demonstrate that understanding of the material surface chemistry enables to selectively improve the adsorption of albumin and fibronectin (used as model proteins). Furthermore, in this study, well-known silicate bioactive glasses (i.e., S53P4 and 13-93) were used as controls. While surface treatments clearly improved proteins adsorption on the surface of both silicate and phosphate glasses, it is of interest to note that protein adsorption on phosphate glasses was drastically improved to reach similar protein grafting ability to the silicate bioactive glasses. Overall, this study demonstrates that the limited cell/phosphate glass biological response can easily be overcome through deep understanding and control of the glass surface chemistry.