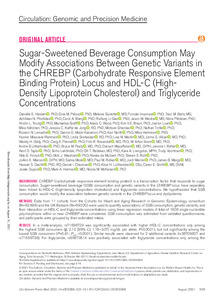 Background: ChREBP (carbohydrate responsive element binding protein) is a transcription factor that responds to sugar consumption. Sugar-sweetened beverage (SSB) consumption and genetic variants in the CHREBP locus have separately been linked to HDL-C (high-density lipoprotein cholesterol) and triglyceride concentrations. We hypothesized that SSB consumption would modify the association between genetic variants in the CHREBP locus and dyslipidemia. Methods: Data from 11 cohorts from the Cohorts for Heart and Aging Research in Genomic Epidemiology consortium (N=63 599) and the UK Biobank (N=59 220) were used to quantify associations of SSB consumption, genetic variants, and their interaction on HDL-C and triglyceride concentrations using linear regression models. A total of 1606 single nucleotide polymorphisms within or near CHREBP were considered. SSB consumption was estimated from validated questionnaires, and participants were grouped by their estimated intake. Results: In a meta-analysis, rs71556729 was significantly associated with higher HDL-C concentrations only among the highest SSB consumers (β, 2.12 [95% CI, 1.16-3.07] mg/dL per allele; P<0.0001), but not significantly among the lowest SSB consumers (P=0.81; PDiff<0.0001). Similar results were observed for 2 additional variants (rs35709627 and rs71556736). For triglyceride, rs55673514 was positively associated with triglyceride concentrations only among the highest SSB consumers (β, 0.06 [95% CI, 0.02-0.09] ln-mg/dL per allele, P=0.001) but not the lowest SSB consumers (P=0.84; PDiff=0.0005). Conclusions: Our results identified genetic variants in the CHREBP locus that may protect against SSB-associated reductions in HDL-C and other variants that may exacerbate SSB-associated increases in triglyceride concentrations. Registration: URL: https://www.clinicaltrials.gov; Unique identifier: NCT00005133, NCT00005121, NCT00005487, and NCT00000479.