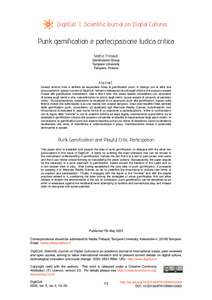 This paper aims to establish and expand the idea of punk gamification, in dialogue with the other two provocations in this issue of DigitCult. It starts by outlining the main criticisms that can be moved to the mainstream understanding of gamification, namely the fact that it is a tool to gain power over users and that it can hinder critical thinking by naturalising the users' actions. Subsequently, the paper argues for the necessity of a punk approach to gamification, based around the freedom of the users and on a non-utopian view of play. After having established the core idea of punk gamification, it proceeds by applying it to Alternate Reality Games, so as to underline the importance to include new forms of co-creation and participation. Finally, it engages with the figure of the "zombie" and with the playful practices related to it, positioning the latter among the strategies of urban gamification that can allow citizens to reclaim the environments of the city. In conclusion, punk gamification can be described as an effort of resistance against the neoliberal trend attempting to sanitize and domesticate play, and instead claim its disruptive and social potential.