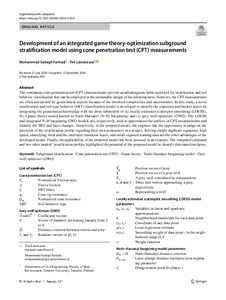 The continuous cone penetration test (CPT) measurements provide an advantageous liable rapid tool for stratifcation and soil behavior classifcation that can be employed in the sustainable design of the infrastructures. However, the CPT measurements are often interpreted by geotechnical experts because of the involved complexities and uncertainties. In this study, a novel stratifcation and soil type behavior (SBT) classifcation model is developed to identify the transition and thicker layers by integrating the geotechnical knowledge with the three submodels of (a) locally estimated scatterplot smoothing (LOESS), (b) a game theory model known as Nash–Harsanyi (N–H) bargaining, and (c) grey wolf optimizer (GWO). The LOESS and integrated N–H bargaining-GWO models are, respectively, used to approximate the outliers in CPT measurements and identify the SBT and layer changes. Attractively, in the proposed model, the engineer has the opportunity to judge on the precision of the stratifcation profle regarding their own preferences in a project. Solving simple algebraic equations, high speed, identifying thick and the interlayer transition layers, and small required training data are the other advantages of the developed model. Finally, the applicability of the proposed model has been assessed in an example. The compared estimated and two other models’ stratifcation profles highlighted the potential of the proposed model to identify thin transition layers.