DNA methylation signatures of aggression and closely related constructs : A meta-analysis of epigenome-wide studies across the lifespan 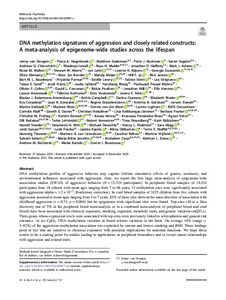 DNA methylation profiles of aggressive behavior may capture lifetime cumulative effects of genetic, stochastic, and environmental influences associated with aggression. Here, we report the first large meta-analysis of epigenome-wide association studies (EWAS) of aggressive behavior (N = 15,324 participants). In peripheral blood samples of 14,434 participants from 18 cohorts with mean ages ranging from 7 to 68 years, 13 methylation sites were significantly associated with aggression (alpha = 1.2 × 10−7; Bonferroni correction). In cord blood samples of 2425 children from five cohorts with aggression assessed at mean ages ranging from 4 to 7 years, 83% of these sites showed the same direction of association with childhood aggression (r = 0.74, p = 0.006) but no epigenome-wide significant sites were found. Top-sites (48 at a false discovery rate of 5% in the peripheral blood meta-analysis or in a combined meta-analysis of peripheral blood and cord blood) have been associated with chemical exposures, smoking, cognition, metabolic traits, and genetic variation (mQTLs). Three genes whose expression levels were associated with top-sites were previously linked to schizophrenia and general risk tolerance. At six CpGs, DNA methylation variation in blood mirrors variation in the brain. On average 44% (range = 3–82%) of the aggression–methylation association was explained by current and former smoking and BMI. These findings point at loci that are sensitive to chemical exposures with potential implications for neuronal functions. We hope these results to be a starting point for studies leading to applications as peripheral biomarkers and to reveal causal relationships with aggression and related traits.