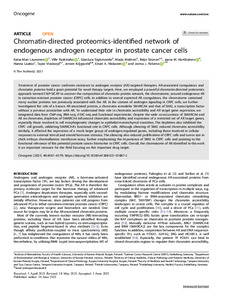 Treatment of prostate cancer confronts resistance to androgen receptor (AR)-targeted therapies. AR-associated coregulators and chromatin proteins hold a great potential for novel therapy targets. Here, we employed a powerful chromatin-directed proteomics approach termed ChIP-SICAP to uncover the composition of chromatin protein network, the chromatome, around endogenous AR in castration resistant prostate cancer (CRPC) cells. In addition to several expected AR coregulators, the chromatome contained many nuclear proteins not previously associated with the AR. In the context of androgen signaling in CRPC cells, we further investigated the role of a known AR-associated protein, a chromatin remodeler SMARCA4 and that of SIM2, a transcription factor without a previous association with AR. To understand their role in chromatin accessibility and AR target gene expression, we integrated data from ChIP-seq, RNA-seq, ATAC-seq and functional experiments. Despite the wide co-occurrence of SMARCA4 and AR on chromatin, depletion of SMARCA4 influenced chromatin accessibility and expression of a restricted set of AR target genes, especially those involved in cell morphogenetic changes in epithelial-mesenchymal transition. The depletion also inhibited the CRPC cell growth, validating SMARCA4’s functional role in CRPC cells. Although silencing of SIM2 reduced chromatin accessibility similarly, it affected the expression of a much larger group of androgen-regulated genes, including those involved in cellular responses to external stimuli and steroid hormone stimulus. The silencing also reduced proliferation of CRPC cells and tumor size in chick embryo chorioallantoic membrane assay, further emphasizing the importance of SIM2 in CRPC cells and pointing to the functional relevance of this potential prostate cancer biomarker in CRPC cells. Overall, the chromatome of AR identified in this work is an important resource for the field focusing on this important drug target.