Mortality After Trauma Craniotomy Is Decreasing in Older Adults : A Nationwide Population-Based Study 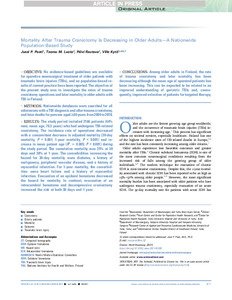 Objective: No evidence-based guidelines are available for operative neurosurgical treatment of older patients with traumatic brain injuries (TBIs), and no population-based results of current practice have been reported. The objective of the present study was to investigate the rates of trauma craniotomy operations and later mortality in older adults with TBI in Finland. Methods: Nationwide databases were searched for all admissions with a TBI diagnosis and after trauma craniotomy, and later deaths for persons aged ≥60 years from 2004 to 2018. Results: The study period included 2166 patients (64% men; mean age, 70.3 years) who had undergone TBI-related craniotomy. The incidence rate of operations decreased with a concomitant decrease in adjusted mortality (30-day mortality, P < 0.001; 1-year mortality, P < 0.001) and increase in mean patient age (R2 = 0.005; P < 0.001) during the study period. The cumulative mortality was 25% at 30 days and 38% at 1 year. The comorbidities increasing the hazard for 30-day mortality were diabetes, a history of malignancy, peripheral vascular disease, and a history of myocardial infarction. For 1-year mortality, the comorbidities were heart failure and a history of myocardial infarction. Evacuation of an epidural hematoma decreased the hazard for mortality. In contrast, evacuation of an intracerebral hematoma and decompressive craniectomy increased the risk at both 30 days and 1 year. Conclusions: Among older adults in Finland, the rate of trauma craniotomy and later mortality has been decreasing although the mean age of operated patients has been increasing. This can be expected to be related to an improved understanding of geriatric TBIs and, consequently, improved selection of patients for targeted therapy.