Panorama of the distal myopathies 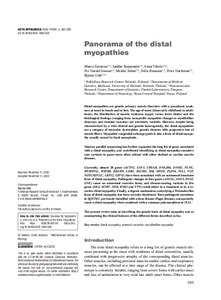 Distal myopathies are genetic primary muscle disorders with a prominent weakness at onset in hands and/or feet. The age of onset (from early childhood to adulthood), the distribution of muscle weakness (upper versus lower limbs) and the histological findings (ranging from nonspecific myopathic changes to myofibrillar disarrays and rimmed vacuoles) are extremely variable. However, despite being characterized by a wide clinical and genetic heterogeneity, the distal myopathies are a category of muscular dystrophies: genetic diseases with progressive loss of muscle fibers. Myopathic congenital arthrogryposis is also a form of distal myopathy usually caused by focal amyoplasia. Massive parallel sequencing has further expanded the long list of genes associated with a distal myopathy, and contributed identifying as distal myopathy-causative rare variants in genes more often related with other skeletal or cardiac muscle diseases. Currently, almost 20 genes (ACTN2, CAV3, CRYAB, DNAJB6, DNM2, FLNC, HNRNPA1, HSPB8, KHLH9, LDB3, MATR3, MB, MYOT, PLIN4, TIA1, VCP, NOTCH2NLC, LRP12, GIPS1) have been associated with an autosomal dominant form of distal myopathy. Pathogenic changes in four genes (ADSSL, ANO5, DYSF, GNE) cause an autosomal recessive form; and disease-causing variants in five genes (DES, MYH7, NEB, RYR1 and TTN) result either in a dominant or in a recessive distal myopathy. Finally, a digenic mechanism, underlying a Welander-like form of distal myopathy, has been recently elucidated. Rare pathogenic mutations in SQSTM1, previously identified with a bone disease (Paget disease), unexpectedly cause a distal myopathy when combined with a common polymorphism in TIA1. The present review aims at describing the genetic basis of distal myopathy and at summarizing the clinical features of the different forms described so far.