Mycoplasma pneumoniae may cause dyspnoea and hospitalisations in young healthy adults 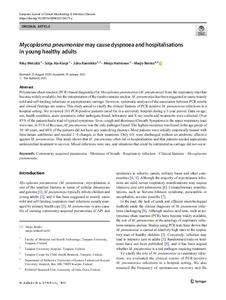 Polymerase chain reaction (PCR)-based diagnostics for Mycoplasma pneumoniae (M. pneumoniae) from the respiratory tract has become widely available, but the interpretation of the results remains unclear. M. pneumoniae has been suggested to cause mainly mild and self-limiting infections or asymptomatic carriage. However, systematic analyses of the association between PCR results and clinical findings are scarce. This study aimed to clarify the clinical features of PCR-positive M. pneumoniae infections in a hospital setting. We reviewed 103 PCR-positive patients cared for in a university hospital during a 3-year period. Data on age, sex, health condition, acute symptoms, other pathogens found, laboratory and X-ray results and treatments were collected. Over 85% of the patients had a triad of typical symptoms: fever, cough and shortness of breath. Symptoms in the upper respiratory tract were rare. In 91% of the cases, M. pneumoniae was the only pathogen found. The highest incidence was found in the age group of 30-40 years, and 68% of the patients did not have any underlying diseases. Most patients were initially empirically treated with beta-lactam antibiotics and needed 2-4 changes in their treatment. Only 6% were discharged without an antibiotic effective against M. pneumoniae. This study shows that M. pneumoniae often led to hospitalisation and that patients needed appropriate antimicrobial treatment to recover. Mixed infections were rare, and situations that could be interpreted as carriage did not occur.