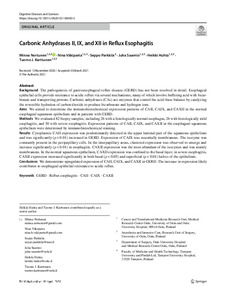 Background: The pathogenesis of gastroesophageal reflux disease (GERD) has not been resolved in detail. Esophageal epithelial cells provide resistance to acidic reflux via several mechanisms, many of which involve buffering acid with bicarbonate and transporting protons. Carbonic anhydrases (CAs) are enzymes that control the acid–base balance by catalyzing the reversible hydration of carbon dioxide to produce bicarbonate and hydrogen ions. Aims: We aimed to determine the immunohistochemical expression patterns of CAII, CAIX, and CAXII in the normal esophageal squamous epithelium and in patients with GERD. Methods: We evaluated 82 biopsy samples, including 26 with a histologically normal esophagus, 26 with histologically mild esophagitis, and 30 with severe esophagitis. Expression patterns of CAII, CAIX, and CAXII in the esophageal squamous epithelium were determined by immunohistochemical staining. Results: Cytoplasmic CAII expression was predominantly detected in the upper luminal part of the squamous epithelium and was significantly (p < 0.01) increased in GERD. Expression of CAIX was essentially membranous. The isozyme was constantly present in the peripapillary cells. In the interpapillary areas, clustered expression was observed to emerge and increase significantly (p < 0.01) in esophagitis. CAXII expression was the most abundant of the isozymes and was mainly membranous. In the normal squamous epithelium, CAXII expression was confined to the basal layer; in severe esophagitis, CAXII expression increased significantly in both basal (p < 0.05) and superficial (p < 0.01) halves of the epithelium. Conclusions: We demonstrate upregulated expression of CAII, CAIX, and CAXII in GERD. The increase in expression likely contributes to esophageal epithelial resistance to acidic reflux.