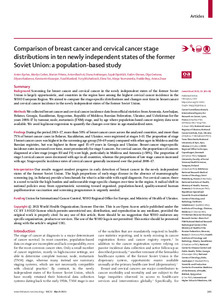 Background: Screening for breast cancer and cervical cancer in the newly independent states of the former Soviet Union is largely opportunistic, and countries in the region have among the highest cervical cancer incidence in the WHO European Region. We aimed to compare the stage-specific distributions and changes over time in breast cancer and cervical cancer incidence in the newly independent states of the former Soviet Union. Methods: We collected breast cancer and cervical cancer incidence data from official statistics from Armenia, Azerbaijan, Belarus, Georgia, Kazakhstan, Kyrgyzstan, Republic of Moldova, Russian Federation, Ukraine, and Uzbekistan for the years 2008–17 by tumour, node, metastasis (TNM) stage, and by age where population-based cancer registry data were available. We used log-linear regression to quantify the changes over time in age-standardised rates. Findings: During the period 2013–17, more than 50% of breast cancer cases across the analysed countries, and more than 75% of breast cancer cases in Belarus, Kazakhstan, and Ukraine, were registered at stages I–II. The proportion of stage I breast cancer cases was highest in the screening age group (50–69 years) compared with other ages in Moldova and the Russian registries, but was highest in those aged 15–49 years in Georgia and Ukraine. Breast cancer stage-specific incidence rates increased over time, most prominently for stage I cancers. For cervical cancer, the proportions of cancers diagnosed at a late stage (stages III and IV) were high, particularly in Moldova and Armenia (>50%). The proportion of stage I cervical cancer cases decreased with age in all countries, whereas the proportions of late stage cancers increased with age. Stage-specific incidence rates of cervical cancer generally increased over the period 2008–17. Interpretation: Our results suggest modest progress in early detection of breast cancer in the newly independent states of the former Soviet Union. The high proportions of early-stage disease in the absence of mammography screening (eg, in Belarus) provide a benchmark for what is achievable with rapid diagnosis. For cervical cancer, there is a need to tackle the high burden and unfavourable stage-specific changes over time in the region. A radical shift in national policies away from opportunistic screening toward organised, population-based, quality-assured human papillomavirus vaccination and screening programmes is urgently needed. Funding: Union for International Cancer Control, WHO Regional Office for Europe, and Ministry of Health of Ukraine.