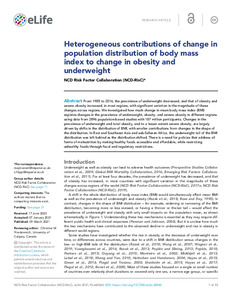 From 1985 to 2016, the prevalence of underweight decreased, and that of obesity and severe obesity increased, in most regions, with significant variation in the magnitude of these changes across regions. We investigated how much change in mean body mass index (BMI) explains changes in the prevalence of underweight, obesity, and severe obesity in different regions using data from 2896 population-based studies with 187 million participants. Changes in the prevalence of underweight and total obesity, and to a lesser extent severe obesity, are largely driven by shifts in the distribution of BMI, with smaller contributions from changes in the shape of the distribution. In East and Southeast Asia and sub-Saharan Africa, the underweight tail of the BMI distribution was left behind as the distribution shifted. There is a need for policies that address all forms of malnutrition by making healthy foods accessible and affordable, while restricting unhealthy foods through fiscal and regulatory restrictions.