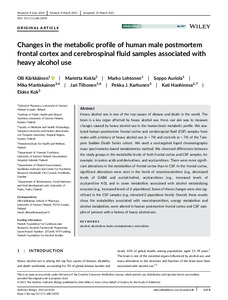 Heavy alcohol use is one of the top causes of disease and death in the world. The brain is a key organ affected by heavy alcohol use. Here, our aim was to measure changes caused by heavy alcohol use in the human brain metabolic profile. We analyzed human postmortem frontal cortex and cerebrospinal fluid (CSF) samples from males with a history of heavy alcohol use (n = 74) and controls (n = 74) of the Tampere Sudden Death Series cohort. We used a nontargeted liquid chromatography mass spectrometry-based metabolomics method. We observed differences between the study groups in the metabolite levels of both frontal cortex and CSF samples, for example, in amino acids and derivatives, and acylcarnitines. There were more significant alterations in the metabolites of frontal cortex than in CSF. In the frontal cortex, significant alterations were seen in the levels of neurotransmitters (e.g., decreased levels of GABA and acetylcholine), acylcarnitines (e.g., increased levels of acylcarnitine 4:0), and in some metabolites associated with alcohol metabolizing enzymes (e.g., increased levels of 2-piperidone). Some of these changes were also significant in the CSF samples (e.g., elevated 2-piperidone levels). Overall, these results show the metabolites associated with neurotransmitters, energy metabolism and alcohol metabolism, were altered in human postmortem frontal cortex and CSF samples of persons with a history of heavy alcohol use.