Process of work disability : From determinants of sickness absence trajectories to disability retirement in a long-term follow-up of municipal employees 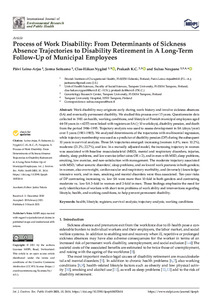 Work disability may originate early during work history and involve sickness absences (SA) and eventually permanent disability. We studied this process over 15 years. Questionnaire data collected in 1981 on health, working conditions, and lifestyle of Finnish municipal employees aged 44–58 years (n = 6257) were linked with registers on SA (≥10 workdays), disability pension, and death from the period 1986–1995. Trajectory analysis was used to assess development in SA (days/year) over 5 years (1981–1985). We analyzed determinants of the trajectories with multinomial regression, while trajectory membership was used as a predictor of disability pension (DP) during the subsequent 10 years in survival analysis. Three SA trajectories emerged: increasing (women: 6.8%; men: 10.2%), moderate (21.2%; 22.7%), and low. In a mutually adjusted model, the increasing trajectory in women was associated with baseline musculoskeletal (MSD), mental and respiratory disorders, injuries, obesity, sleep problems, and low exercise (effect sizes OR > 2), and in men with MSD, sleep problems, smoking, low exercise, and non-satisfaction with management. The moderate trajectory associated with MSD, ‘other somatic disorders’, sleep problems, and awkward work postures in both genders; in women, also overweight, cardiovascular and respiratory morbidity, and (inversely) knowledge-intensive work, and in men, smoking and mental disorders were thus associated. Ten-year risks of DP contrasting increasing vs. low SA were more than 10-fold in both genders and contrasting moderate vs. low SA 3-fold in women and 2-fold in men. These findings emphasize the need for early identification of workers with short-term problems of work ability and interventions regarding lifestyle, health, and working conditions, to help prevent permanent disability.