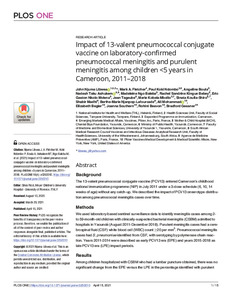 Background The 13-valent pneumococcal conjugate vaccine (PCV13) entered Cameroon’s childhood national immunization programme (NIP) in July 2011 under a 3-dose schedule (6, 10, 14 weeks of age) without any catch-up. We described the impact of PCV13 onserotype distribution among pneumococcal meningitis cases over time. Methods We used laboratory-based sentinel surveillance data to identify meningitis cases among 2-to 59-month-old children with clinically-suspected bacterial meningitis (CSBM) admitted to hospitals in Yaoundé (August 2011-December 2018). Purulent meningitis cases had a cerebrospinal fluid (CSF) white blood cell (WBC) count 20 per mm3. Pneumococcal meningitis cases had S. pneumoniae identified from CSF, with serotyping by polymerase chain reaction. Years 2011-2014 were described as early PCV13 era (EPE) and years 2015-2018 as late PCV13 era (LPE) impact periods. Results Among children hospitalized with CSBM who had a lumbar puncture obtained, there was no significant change from the EPE versus the LPE in the percentage identified with purulent meningitis: 7.5% (112/1486) versus 9.4% (154/1645), p = 0.0846. The percentage of pneumococcal meningitis cases due to PCV13 vaccine-serotype (VST) decreased from 62.0% (31/50) during the EPE to 35.8% (19/53) in the LPE, p = 0.0081. The most frequent pneumococcal meningitis VSTs during the EPE were 6A/6B (30%) and 5 (6%), and during the LPE were 14 (13.2%), 3 (7.6%), 4 (5.6%) and 18C (5.6%). Conclusion Four to seven years after PCV13 introduction, the proportion of pneumococcal meningitis due to vaccine serotypes has declined, mainly due to reductions of serotypes 6A/6B, 1, 19A, and 23F; nevertheless, PCV13 VSTs remain common. Because the analyzed surveillance system was not consistent or population based, we could not estimate incidence or overall impact; this emphasizes the need for improved surveillance to document further the utility of PCV13 immunization in Cameroon.