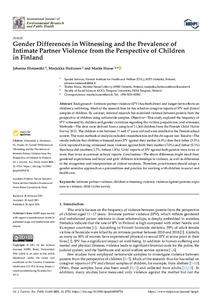 Abstract:  Background: Intimate partner violence (IPV) has both direct and longer‐term effects on children’s wellbeing. Much of the research thus far has relied on caregiver reports of IPV and clinical samples of children. By contrast, minimal  research has examined violence between parents from the perspective of children using nationwide samples.  Objective: This study explored the frequency of IPV witnessed by children and gender variations regarding the victims, perpetrators, and witnesses. Methods: The data were derived from a sample of 11,364 children from the Finnish  Child Victim Survey 2013. The children were between 11 and 17 years old andwere enrolled in the Finnish school system. The main methods of analysis included crosstabulation and the chi‐square test.  Results: The results indicate that children witnessed more IPV against their mother (4.9%) than their father (3.5%). Girls reported having witnessed more violence against both their mother (7.0%) and father (5.1%) than boys did (mothers 2.7%, fathers 1.8%). Girls’ reports of IPV against both parents were twice or more than twice as common as boys’ reports.  Conclusions: The above differences might result from gendered expectations and boys’ and girls’ different relationships to violence, as well as differences in the recognition and interpretation of violent incidents. Therefore, practitioners should adopt a gendersensitive approach as a precondition and practice for working withchildren in social and health care.