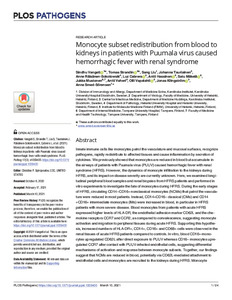 Innate immune cells like monocytes patrol the vasculature and mucosal surfaces, recognize pathogens, rapidly redistribute to affected tissues and cause inflammation by secretion of cytokines. We previously showed that monocytes are reduced in blood but accumulate in the airways of patients with Puumala virus (PUUV) caused hemorrhagic fever with renal syndrome (HFRS). However, the dynamics of monocyte infiltration to the kidneys during HFRS, and its impact on disease severity are currently unknown. Here, we examined longitudinal peripheral blood samples and renal biopsies from HFRS patients and performed in vitro experiments to investigate the fate of monocytes during HFRS. During the early stages of HFRS, circulating CD14-CD16+ nonclassical monocytes (NCMs) that patrol the vasculature were reduced in most patients. Instead, CD14+CD16-classical (CMs) and CD14 +CD16+ intermediate monocytes (IMs) were increased in blood, in particular in HFRS patients with more severe disease. Blood monocytes from patients with acute HFRS expressed higher levels of HLA-DR, the endothelial adhesion marker CD62L and the chemokine receptors CCR7 and CCR2, as compared to convalescence, suggesting monocyte activation and migration to peripheral tissues during acute HFRS. Supporting this hypothesis, increased numbers of HLA-DR+, CD14+, CD16+ and CD68+ cells were observed in the renal tissues of acute HFRS patients compared to controls. In vitro, blood CD16+ monocytes upregulated CD62L after direct exposure to PUUV whereas CD16-monocytes upregulated CCR7 after contact with PUUV-infected endothelial cells, suggesting differential mechanisms of activation and response between monocyte subsets. Together, our findings suggest that NCMs are reduced in blood, potentially via CD62L-mediated attachment to endothelial cells and monocytes are recruited to the kidneys during HFRS. Monocytemobilization, activation and functional impairment together may influence the severity of disease in acute PUUV-HFRS.