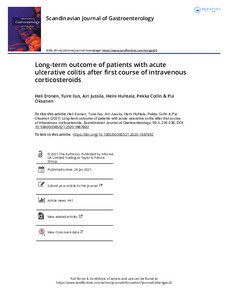 Background and aims: Every fifth patient with ulcerative colitis (UC) experiences severe acute flare at some point in the course of the disease. Corticosteroids (Cs) remain the treatment of choice in acute flare. Data on the efficacy of first intravenous Cs in the long-term prognosis of UC are scarce and were investigated here. Materials and methods: All episodes of patients with acute UC admitted to Tampere University Hospital and treated with intravenous Cs between January 2007 and January 2016 were identified from patient records and reviewed. The risks for colectomy and for continuous use of Cs were evaluated. Predictive factors were analysed. Results: The study comprised 217 patients of whom 184 (85%) responded to intravenous Cs at index flare. Of the 33 non-responders, 31 (94%) were treated with intravenous cyclosporine A and 28 responded. Five (2.3%) patients needed emergency colectomy. Twenty-six (12%) patients underwent colectomy within 1 year of index flare. Overall colectomy rate was 56 (26%) during follow-up (median 7.5 years, range 0.1–10.5). Six months after index flare 66 (30%) patients were still on steroids. In this series 149 (69%) required further Cstherapy and 104 (48%) needed rehospitalization for new flare at some point during follow-up. Overall 155 patients were treated with thiopurines, of whom 72% within the first year after admission. A total of 36 patients had infliximab as a first-line biological treatment, nine needed second-line therapy with adalimumab or vedolizumab after infliximab failed. Conclusion: Although intravenous Cs were efficient in inducing clinical response in patients with severe acute UC, only one fifth maintained remission in the long term. Two-thirds of patients required further Cs and the overall colectomy rate remained at 26%. High relapse rate indicates the need for closer monitoring of these patients. Enhancement of maintenance therapy should be considered at early stage after acute flare.