Who are you, the people? : Constructing the people in MV-lehti's refugee coverage 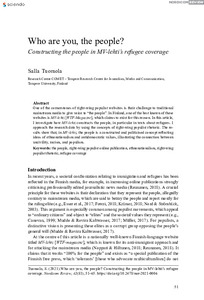 One of the cornerstones of right-wing populist websites is their challenge to traditional mainstream media to give voice to “the people”. In Finland, one of the best known of these websites is MV-lehti [WTF-Magazine], which claims to exist for this reason. In this article, I investigate how MV-lehti constructs the people, in particular in texts about refugees. I approach the research data by using the concepts of right-wing populist rhetoric. The results show that, in MV-lehti, the people is a constructed and politicised concept reflecting ideas of ethnonationalism and antidemocratic values, illustrating the connection between uncivility, racism, and populism.