Identifying the miRNA signature association with aging-related senescence in glioblastoma 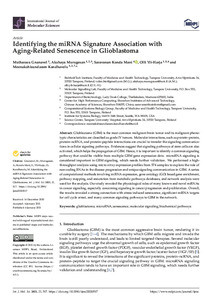 Glioblastoma (GBM) is the most common malignant brain tumor and its malignant phenotypic characteristics are classified as grade IV tumors. Molecular interactions, such as protein–protein, protein–ncRNA, and protein–peptide interactions are crucial to transfer the signaling communications in cellular signaling pathways. Evidences suggest that signaling pathways of stem cells are also activated, which helps the propagation of GBM. Hence, it is important to identify a common signaling pathway that could be visible from multiple GBM gene expression data. microRNA signaling is considered important in GBM signaling, which needs further validation. We performed a highthroughput analysis using micro array expression profiles from 574 samples to explore the role of non-coding RNAs in the disease progression and unique signaling communication in GBM. A series of computational methods involving miRNA expression, gene ontology (GO) based gene enrichment, pathway mapping, and annotation from metabolic pathways databases, and network analysis were used for the analysis. Our study revealed the physiological roles of many known and novel miRNAs in cancer signaling, especially concerning signaling in cancer progression and proliferation. Overall, the results revealed a strong connection with stress induced senescence, significant miRNA targets for cell cycle arrest, and many common signaling pathways to GBM in the network.