An Ethics of Images: ‘The Distant’ 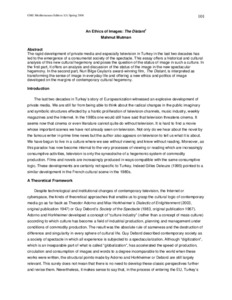 The rapid development of private media and especially television in Turkey in the last two decades has led to the emergence of a consumerist society of the spectacle. This essay offers a historical and cultural analysis of this new cultural hegemony and poses the question of the status of image in such a culture. In the first part, it offers an analysis and discussion of the status of the image in the new spectacular hegemony. In the second part, Nuri Bilge Ceylan’s award-winning film, The Distant, is interpreted as transforming the sense of image in everyday life and offering a new ethics and politics of image developed on the margins of contemporary cultural hegemony.