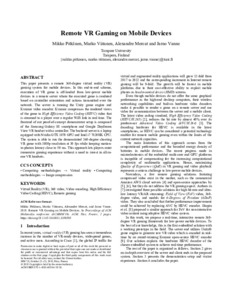 This paper presents a remote 360-degree virtual reality (VR) gaming system for mobile devices. In this end-to-end scheme, execution of VR game is off-loaded from low-power mobile devices to a remote server where the executed game is rendered based on controller orientation and actions transmitted over the network. The server is running the Unity game engine and Kvazaar video encoder. Kvazaar compresses the rendered views of the game to High Efficiency Video Coding (HEVC) video that is streamed to a player over a regular WiFi link in real time. The frontend of our proof-of-concept demonstrator setup is composed of the Samsung Galaxy S8 smartphone and Google Daydream View VR headset with a controller. The backend server is a laptop equipped with Nvidia GTX 1070 GPU and Intel i7 7820HK CPU. The system is able to run the demonstrated 360-degree shooting VR game with 1080p resolution at 30 fps while keeping motion-to-photon latency close to 50 ms. This approach lets players enter immersive gaming experience without a need to invest in all-in-one VR headsets.