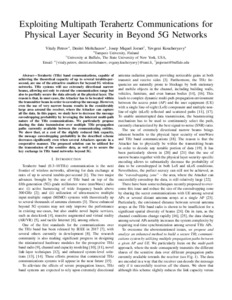 Terahertz (THz) band communications, capable of achieving the theoretical capacity of up to several terabits-per-second, are one of the attractive enablers for beyond 5G wireless networks. THz systems will use extremely directional narrow beams, allowing not only to extend the communication range but also to partially secure the data already at the physical layer. The reason is that, in most cases, the Attacker has to be located within the transmitter beam in order to eavesdrop the message. However, even the use of very narrow beams results in the considerably large area around the receiver, where the Attacker can capture all the data. In this paper, we study how to decrease the message eavesdropping probability by leveraging the inherent multi-path nature of the THz communications. We particularly propose sharing the data transmission over multiple THz propagation paths currently available between the communicating entities. We show that, at a cost of the slightly reduced link capacity, the message eavesdropping probability in the described scheme decreases significantly even when several Attackers operate in a cooperative manner. The proposed solution can be utilized for the transmission of the sensitive data, as well as to secure the key exchange in THz band networks beyond 5G.