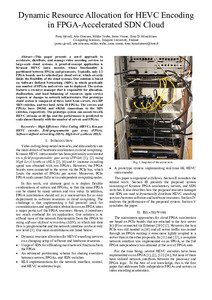 This paper presents a novel approach to accelerate, distribute, and manage video encoding services in large-scale cloud systems. A proof-of-concept application is Kvazaar HEVC intra encoder, whose functionality is partitioned between FPGAs and processors. Typically, only 1-2 FPGA boards can be attached per cloud server, which severely limits the flexibility of the cloud systems. Our solution is based on Software Defined Networking (SDN), in which practically any number of FPGAs and servers can be deployed. The system features a resource manager that is responsible for allocation, deallocation, and load balancing of resources upon service requests or changes in network infrastructure. Our prototype cloud system is composed of three Intel Xeon servers, two HP SDN switches, and two Intel Arria 10 FPGAs. The servers and FPGAs have 20GbE and 40GbE connections to the SDN switches, respectively. The prototype system can encode two 4K HEVC streams at 60 fps and the performance is predicted to scale almost linearly with the number of servers and FPGAs.