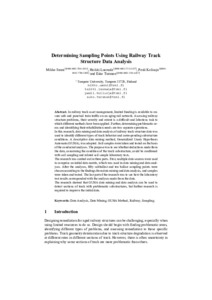 In railway track asset management, limited funding is available to ensure safe and punctual train traffic on an aging rail network. Assessing railway structure problems, their severity and extent is a difficult and laborious task to which different methods have been applied. Further, determining problematic areas and identifying their rehabilitation needs are two separate operations. In this research, data mining and data analysis of railway track structure data was used to identify different types of track behavior and corresponding substructure conditions. A descriptive data mining method, Generalized Unary Hypothesis Automata (GUHA), was adopted. Soil samples were taken and tested on the basis of the conducted analyses. The purpose was to see whether deductions made from the data, concerning the condition of the track substructure, could be confirmed with soil sampling and related soil sample laboratory tests. The research was carried out in three parts. First, multiple data sources were used to comprise an initial data matrix, which was used in data mining and data analyses. After the analyses, fifty subballast and ten ballast sampling points were chosen according to the findings from data mining and data analysis, and samples were taken and tested. The last part of the research was to see how the laboratory test results corresponded with the analyses made from the data. The research showed that GUHA data mining and data analysis can be used to detect sections of track with problematic substructures, but further research is required to improve the initial data.