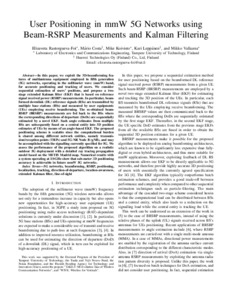 In this paper, we exploit the 3D-beamforming features of multiantenna equipment employed in fifth generation (5G) networks, operating in the millimeter wave (mmW) band, for accurate positioning and tracking of users. We consider sequential estimation of users' positions, and propose a two-stage extended Kalman filter (EKF) that is based on reference signal received power (RSRP) measurements. In particular, beamformed downlink (DL) reference signals (RSs) are transmitted by multiple base stations (BSs) and measured by user equipments (UEs) employing receive beamforming. The so-obtained beam-RSRP (BRSRP) measurements are reported to the BSs where the corresponding directions of departure (DoDs) are sequentially estimated by a novel EKF. Such angle estimates from multiple BSs are subsequently fused on a central entity into 3D position estimates of UEs by means of another (second-stage) EKF. The proposed positioning scheme is scalable since the computational burden is shared among different network entities, namely transmission/reception points (TRPs) and 5G-NR Node B (gNB), and may be accomplished with the signalling currently specified for 5G. We assess the performance of the proposed algorithm on a realistic outdoor 5G deployment with a detailed ray tracing propagation model based on the METIS Madrid map. Numerical results with a system operating at 39 GHz show that sub-meter 3D positioning accuracy is achievable in future mmW 5G networks.