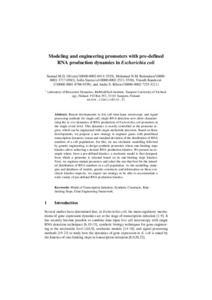 Recent developments in live-cell time-lapse microscopy and signal processing methods for single-cell, single-RNA detection now allow characterizing the in vivo dynamics of RNA production of Escherichia coli promoters at the single event level. This dynamics is mostly controlled at the promoter region, which can be engineered with single nucleotide precision. Based on these developments, we propose a new strategy to engineer genes with predefined transcription dynamics (mean and standard deviation of the distribution of RNA numbers of a cell population). For this, we use stochastic modelling followed by genetic engineering, to design synthetic promoters whose rate-limiting steps kinetics allow achieving a desired RNA production kinetics. We present an example where, from a pre-defined kinetics, a stochastic model is first designed, from which a promoter is selected based on its rate-limiting steps kinetics. Next, we engineer mutant promoters and select the one that best fits the intended distribution of RNA numbers in a cell population. As the modelling strategies and databases of models, genetic constructs, and information on these constructs kinetics improve, we expect our strategy to be able to accommodate a wide variety of pre-defined RNA production kinetics.