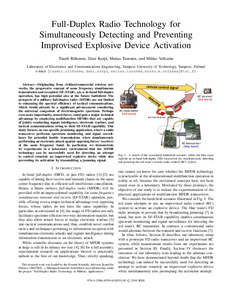 Originating from civilian/commercial wireless networks, the progressive concept of same frequency simultaneous transmission and reception (SF-STAR), a.k.a. in-band full-duplex operation, has high potential also at the future battlefield. The prospects of a military full-duplex radio (MFDR) are not limited to enhancing the spectral efficiency of tactical communications, which would already be a significant advancement considering the universal congestion of electromagnetic spectrum. Perhaps even more importantly, armed forces could gain a major technical advantage by employing multifunction MFDRs that are capable of jointly conducting signals intelligence, electronic warfare, and tactical communications owing to their SF-STAR capability. This study focuses on one specific promising application, where a radio transceiver performs spectrum monitoring and signal surveillance for potential hostile transmissions when simultaneously performing an electronic attack against opposing forces' receivers at the same frequency band. In particular, we demonstrate by experiments in a laboratory environment that the MFDR technology can be successfully used for detecting an attempt to control remotely an improvised explosive device while also preventing its activation by transmitting a jamming signal.