On the prospects of full-duplex military radios 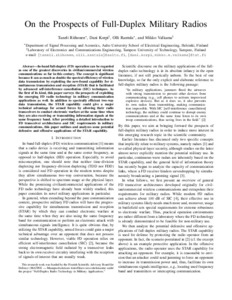 In-band full-duplex (FD) operation can be regarded as one of the greatest discoveries in civilian/commercial wireless communications so far in this century. The concept is significant because it can as much as double the spectral efficiency of wireless data transmission by exploiting the new-found capability for simultaneous transmission and reception (STAR) that is facilitated by advanced self-interference cancellation (SIC) techniques. As the first of its kind, this paper surveys the prospects of exploiting the emerging FD radio technology in military communication applications as well. In addition to spectrally efficient two-way data transmission, the STAR capability could give a major technical advantage for armed forces by allowing their radio transceivers to conduct electronic warfare at the same time when they are also receiving or transmitting information signals at the same frequency band. After providing a detailed introduction to FD transceiver architectures and SIC requirements in military communications, this paper outlines and analyzes some potential defensive and offensive applications of the STAR capability.