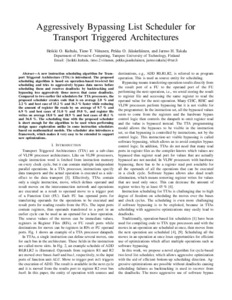 A new instruction scheduling algorithm for Transport Triggered Architecture (TTA) is introduced. The proposed scheduling algorithm is based on operation-based two-level list scheduling and tries to aggressively bypass data moves before scheduling them and resolves deadlocks by backtracking and bypassing less aggressively those moves that cause deadlocks. Compared to two earlier list schedulers for TTA processors, the proposed scheduler creates code that is on average 2.0 % and 2.2 % and best case of 15.2 % and 16.3 % faster while reducing the amount of register file reads by on average of 9.7 % and 6.9 % and best cases of 31.0 % and 19.0 %, and register file writes on average 18.0 % and 18.9 % and best cases of 48.1 % and 36.8 %. The scheduling time with the proposed scheduler is short enough for the algorithm to be used when performing design space exploration unlike in some instruction schedulers based on mathematical models. The scheduler also introduces a framework, which makes it very easy to be extended to support new optimizations.