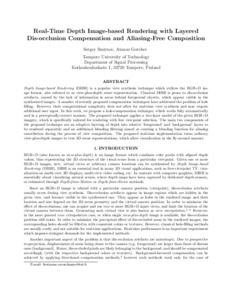 Proceedings of SPIE - The International Society for Optical Engineering

Depth Image-based Rendering (DIBR) is a popular view synthesis technique which utilizes the RGB+D image format, also referred to as view-plus-depth scene representation. Classical DIBR is prone to dis-occlusion artefacts, caused by the lack of information in areas behind foreground objects, which appear visible in the synthesized images. A number of recently proposed compensation techniques have addressed the problem of hole filling. However, their computational complexity does not allow for real-time view synthesis and may require additional user input. In this work, we propose a hole-compensation technique, which works fully automatically and in a perceptually-correct manner. The proposed technique applies a two-layer model of the given RGB+D imagery, which is specifically tailored for rendering with free viewpoint selection. The main two components of the proposed technique are an adaptive layering of depth into relative 'foreground' and 'background' layers to be rendered separately and an additional blending filtering aimed at creating a blending function for aliasing cancellation during the process of view composition. The proposed real-time implementation turns ordinary view-plus-depth images to true 3D scene representations, which allow visualization in the fly-around manner.