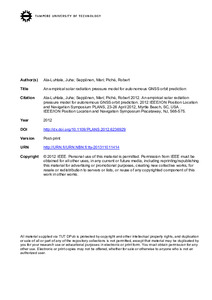 GNSS satellite orbits can be predicted by integrating the satellites’ equation of motion. If the prediction is done in a consumer grade positioning device, a simplified version of the equation of motion is required. The forces due to Earth’s gravitation, solar gravitation and lunar gravitation should be included, but the models for the smaller non-gravitational forces can be fairly simple. This paper presents a simple empirical two parameter solar radiation pressure model for an orbit prediction application in a navigation device that does not have a network connection. The model is tested by predicting the orbits of GPS and GLONASS satellites up to 5 days into the future, using position and improved velocity from broadcast ephemerides as an initial state. The predicted orbits are compared to the precise orbits from International GNSS Service (IGS).