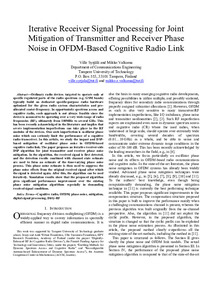 Ordinary radio devices targeted to operate only at specific regulated parts of the radio spectrum (e.g. GSM bands) typically build on dedicated specific-purpose radio hardware optimized for the given radio system characteristics and preallocated center-frequency. In opportunistic spectrum access and cognitive radio, such approach is not always feasible since the device is assumed to be operating over a very wide range of radio frequencies (RF), ultimately from 100MHz to several GHz. This has been recently acknowledged in the literature and implies that severe implementation imperfections can take place in the RF modules of the devices. One such imperfection is oscillator phase noise which can seriously limit the performance of a cognitive radio transceiver. In this article, we study the impact and DSP based mitigation of oscillator phase noise in OFDM-based cognitive radio link. The paper proposes an iterative receiver-side DSP algorithm for joint transmitter and receiver phase noise mitigation. In the algorithm, the received signal is first detected, and the detection results combined with channel state estimate are used to form an estimate of the time-varying phase noise process. This phase noise estimate is then used to suppress the phase noise effects from the original received signal after which the signal is detected again. After this, the algorithm can be used iteratively. Simulation results show that the proposed algorithm gives significant performance improvement over the existing phase noise mitigation algorithms especially in demanding received signal conditions.