Formulation, printing, and poling method for piezoelectric films based on PVDF–TrFE 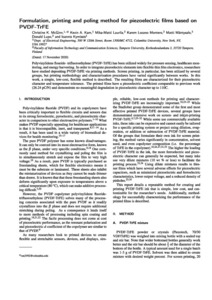 Polyvinylidene fluoride- trifluoroethylene (PVDF–TrFE) has been utilized widely for pressure sensing, healthcare monitoring, and energy harvesting. In order to integrate piezoelectric elements into flexible thin film electronics, researchers have studied depositing PVDF–TrFE via printing methods. Screen printing, in particular, has been utilized by several groups but printing methodology and characterization procedures have varied significantly between works. In this work, a simple, low-cost, flexible method is described. The resulting films are characterized for their piezoelectric character and temperature tolerance. The printed films have a piezoelectric coefficient comparable to previous work (26.24 pC/N) and demonstrate no meaningful degradation in piezoelectric character up to 110C.