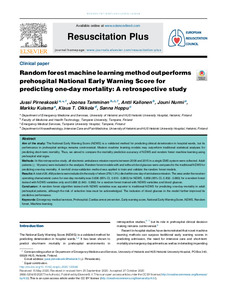 Aim of the study The National Early Warning Score (NEWS) is a validated method for predicting clinical deterioration in hospital wards, but its performance in prehospital settings remains controversial. Modern machine learning models may outperform traditional statistical analyses for predicting short-term mortality. Thus, we aimed to compare the mortality prediction accuracy of NEWS and random forest machine learning using prehospital vital signs. Methods In this retrospective study, all electronic ambulance mission reports between 2008 and 2015 in a single EMS system were collected. Adult patients (≥ 18 years) were included in the analysis. Random forest models with and without blood glucose were compared to the traditional NEWS for predicting one-day mortality. A ten-fold cross-validation method was applied to train and validate the random forest models. Results A total of 26,458 patients were included in the study of whom 278 (1.0%) died within one day of ambulance mission. The area under the receiver operating characteristic curve for one-day mortality was 0.836 (95% CI, 0.810−0.860) for NEWS, 0.858 (95% CI, 0.832−0.883) for a random forest trained with NEWS variables only and 0.868 (0.843−0.892) for a random forest trained with NEWS variables and blood glucose. Conclusion A random forest algorithm trained with NEWS variables was superior to traditional NEWS for predicting one-day mortality in adult prehospital patients, although the risk of selection bias must be acknowledged. The inclusion of blood glucose in the model further improved its predictive performance.