Efficacy and safety of darolutamide in Japanese patients with nonmetastatic castration-resistant prostate cancer : a sub-group analysis of the phase III ARAMIS trial 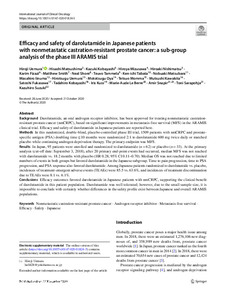 Background: Darolutamide, an oral androgen receptor inhibitor, has been approved for treating nonmetastatic castration-resistant prostate cancer (nmCRPC), based on significant improvements in metastasis-free survival (MFS) in the ARAMIS clinical trial. Efficacy and safety of darolutamide in Japanese patients are reported here. Methods: In this randomized, double-blind, placebo-controlled phase III trial, 1509 patients with nmCRPC and prostate-specific antigen (PSA) doubling time ≤ 10 months were randomized 2:1 to darolutamide 600 mg twice daily or matched placebo while continuing androgen deprivation therapy. The primary endpoint was MFS. Results: In Japan, 95 patients were enrolled and randomized to darolutamide (n = 62) or placebo (n = 33). At the primary analysis (cut-off date: September 3, 2018), after 20 primary end-point events had occurred, median MFS was not reached with darolutamide vs. 18.2 months with placebo (HR 0.28, 95% CI 0.11–0.70). Median OS was not reached due to limited numbers of events in both groups but favored darolutamide in the Japanese subgroup. Time to pain progression, time to PSA progression, and PSA response also favored darolutamide. Among Japanese patients randomized to darolutamide vs. placebo, incidences of treatment-emergent adverse events (TEAEs) were 85.5 vs. 63.6%, and incidences of treatment discontinuation due to TEAEs were 8.1 vs. 6.1%. Conclusions: Efficacy outcomes favored darolutamide in Japanese patients with nmCRPC, supporting the clinical benefit of darolutamide in this patient population. Darolutamide was well tolerated; however, due to the small sample size, it is impossible to conclude with certainty whether differences in the safety profile exist between Japanese and overall ARAMIS populations.