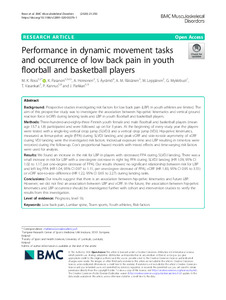 Background: Prospective studies investigating risk factors for low back pain (LBP) in youth athletes are limited. The aim of this prospective study was to investigate the association between hip-pelvic kinematics and vertical ground reaction force (vGRF) during landing tasks and LBP in youth floorball and basketball players. Methods: Three-hundred-and-eighty-three Finnish youth female and male floorball and basketball players (mean age 15.7 ± 1.8) participated and were followed up on for 3 years. At the beginning of every study year the players were tested with a single-leg vertical drop jump (SLVDJ) and a vertical drop jump (VDJ). Hip-pelvic kinematics, measured as femur-pelvic angle (FPA) during SLVDJ landing, and peak vGRF and side-to-side asymmetry of vGRF during VDJ landing were the investigated risk factors. Individual exposure time and LBP resulting in time-loss were recorded during the follow-up. Cox's proportional hazard models with mixed effects and time-varying risk factors were used for analysis. Results: We found an increase in the risk for LBP in players with decreased FPA during SLVDJ landing. There was a small increase in risk for LBP with a one-degree decrease in right leg FPA during SLVDJ landing (HR 1.09, 95% CI 1.02 to 1.17, per one-degree decrease of FPA). Our results showed no significant relationship between risk for LBP and left leg FPA (HR 1.04, 95% CI 0.97 to 1.11, per one-degree decrease of FPA), vGRF (HR 1.83, 95% CI 0.95 to 3.51) or vGRF side-to-side difference (HR 1.22, 95% CI 0.65 to 2.27) during landing tasks. Conclusions: Our results suggest that there is an association between hip-pelvic kinematics and future LBP. However, we did not find an association between LBP and vGRF. In the future, the association between hip-pelvic kinematics and LBP occurrence should be investigated further with cohort and intervention studies to verify the results from this investigation. Level of evidence: Prognosis, level 1b.