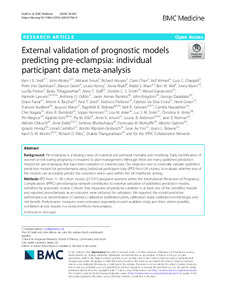 BACKGROUND: Pre-eclampsia is a leading cause of maternal and perinatal mortality and morbidity. Early identification of women at risk during pregnancy is required to plan management. Although there are many published prediction models for pre-eclampsia, few have been validated in external data. Our objective was to externally validate published prediction models for pre-eclampsia using individual participant data (IPD) from UK studies, to evaluate whether any of the models can accurately predict the condition when used within the UK healthcare setting. METHODS: IPD from 11 UK cohort studies (217,415 pregnant women) within the International Prediction of Pregnancy Complications (IPPIC) pre-eclampsia network contributed to external validation of published prediction models, identified by systematic review. Cohorts that measured all predictor variables in at least one of the identified models and reported pre-eclampsia as an outcome were included for validation. We reported the model predictive performance as discrimination (C-statistic), calibration (calibration plots, calibration slope, calibration-in-the-large), and net benefit. Performance measures were estimated separately in each available study and then, where possible, combined across studies in a random-effects meta-analysis. RESULTS: Of 131 published models, 67 provided the full model equation and 24 could be validated in 11 UK cohorts. Most of the models showed modest discrimination with summary C-statistics between 0.6 and 0.7. The calibration of the predicted compared to observed risk was generally poor for most models with observed calibration slopes less than 1, indicating that predictions were generally too extreme, although confidence intervals were wide. There was large between-study heterogeneity in each model's calibration-in-the-large, suggesting poor calibration of the predicted overall risk across populations. In a subset of models, the net benefit of using the models to inform clinical decisions appeared small and limited to probability thresholds between 5 and 7%. CONCLUSIONS: The evaluated models had modest predictive performance, with key limitations such as poor calibration (likely due to overfitting in the original development datasets), substantial heterogeneity, and small net benefit across settings. The evidence to support the use of these prediction models for pre-eclampsia in clinical decision-making is limited. Any models that we could not validate should be examined in terms of their predictive performance, net benefit, and heterogeneity across multiple UK settings before consideration for use in practice. TRIAL REGISTRATION: PROSPERO ID: CRD42015029349 .