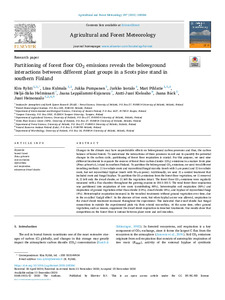 Changes in the climate may have unpredictable effects on belowground carbon processes and thus, the carbon balance of boreal forests. To understand the interactions of these processes in soil and to quantify the potential changes in the carbon cycle, partitioning of forest floor respiration is crucial. For this purpose, we used nine different treatments to separate the sources of forest floor carbon dioxide (CO2) emissions in a mature Scots pine (Pinus sylvestris L.) stand in southern Finland. To partition the belowground CO2 emissions, we used two different trenching methods: 1) to exclude roots and mycorrhizal fungal mycelia (mesh with 1-µm pores) and 2) to exclude roots, but not mycorrhizal hyphae (mesh with 50-µm pores). Additionally, we used 3) a control treatment that included roots and fungal hyphae. To partition the CO2 emissions from the forest floor vegetation, we 1) removed it, 2) left only the dwarf shrubs, or 3) left the vegetation intact. The forest floor CO2 emissions were regularly measured with a flux chamber throughout the growing seasons in 2013–2015. The total forest floor respiration was partitioned into respiration of tree roots (contributing 48%), heterotrophic soil respiration (30%) and respiration of ground vegetation other than shrubs (10%), dwarf shrubs (8%), and hyphae of mycorrhizal fungi (4%). Heterotrophic respiration increased in the trenched treatments without ground vegetation over time, due to the so-called ‘Gadgil effect’. In the absence of tree roots, but when hyphal access was allowed, respiration in the dwarf shrub treatment increased throughout the experiment. This indicated that dwarf shrubs had fungal connections to outside the experimental plots via their ericoid mycorrhiza. At the same time, other ground vegetation, such as mosses, suppressed the dwarf shrub respiration in trenched treatments. Our results show that competition on the forest floor is intense between plant roots and soil microbes.